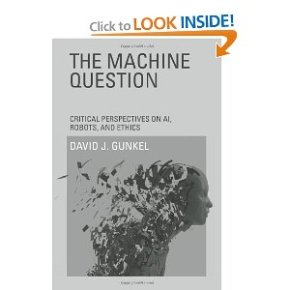 New discoveries in the field of Artificial Intelligence have led to innovative new implementation of artificially intelligent machines, some including the usage of computers to treat those with mental illness, such as social anxiety, in place of a psychiatrist. In this paper I will talk about the ethical issues that arise when using artificially intelligent machines in place of humans in jobs that require empathy and moral decisions.

Although the day when artificially intelligent machines are indistinguishable from humans is distant, new steps in technology have created instances in which humans have been replaced with technology in issues concerning the well-being of humans. Programs such as AI Therapy take steps to treat social anxiety online, without human interaction. This particular implementation doesn’t seem to be problematic; I personally think this is a very well-thought out way to treat this specific illness. What I’m concerned with is what something like this may lead to in the near future. The decision of when and where artificially intelligent machines should replace humans hasn’t really been defined so the questions of whether it’s immoral to use a machine to be responsible for the metal well-being of a human when it lacks conscience or empathy, or would limits like this stunt the growth of important new artificially intelligent machines hasn’t been answered. I think that artificially intelligent machines should not be used to entirely replace human decisions in areas regarding: psychology, hospice care, and caring for the seriously disabled, but should be used to supplement them. This would allow people to research much more about the use of Artificial Intelligence in these areas while still having human decisions dominate most of the decision making in these areas, to ensure proper treatment for vulnerable patients.

Artificially Intelligent machines can be applied to the treatment and diagnosis of mental illness in very different ways. One new way that’s becoming more common than expected is diagnosis. Like in the AI Therapy program, a questionnaire will be filled out by the patient and the results determine whether or not the patient has the suspected illness. A possible step up from the questionnaire diagnosis could involve using case-based reasoning with open ended responses, if the computer could learn trigger phrases and sentiments that are common among certain mental illnesses and then add new responses to its list of possible phrases, much like the cases in the Restaurant Game. Compared to simple multiple choice and ‘yes or no’ answers this would could allow for a much more accurate understanding of the mental state of the patient, especially when reviewed by an actual therapist. The immediate documentation of the responses of patients and their response to different treatment could also be beneficial in discovering different trends that may have otherwise been overlooked. If something like this was implemented on a large enough scale, it’s possible that psychiatrists could gain much more insight into what treatments are working on patients of a certain type, and how they can change their methods to better fit those in certain situations.

One very interesting application of artificial intelligence in this area is the website AI Therapy. Developed between 2007 and 2011 by Fjola Helgadottir at the University of Sydney, this program not only treats Social Anxiety, but is said to diagnose it. The program creates a customized system to help treat each patient’s specific symptoms that we determined during the pre-questionnaire. At the moment they don’t have a large enough sample size at AI Therapy to publish specific results, but their statistics for their two trials were very intriguing. During the first trial, which involved two patients suffering from social phobia, the symptoms that they experienced before undergoing the program were gone. In the second trial, of the eighteen participants, ten finished the seven steps of the program. All of the ten graduates all of them did not meet the requirements for social phobia by the end of the program, and sixteen of the participants showed a decrease in anxiety and depressed mood. *** need to find a good source of the statistics of the success of cognitive behavior therapy and other types (try to create own graph) ***

One major problem when leaving an artificially intelligent machine up to diagnosing mental illness is the actual implementation and development of this sort of technology. If this machine were to understand and form an accurate analysis of written speech. Not only would it have to understand the meaning of these answers, but it would also have to use context clues to find hidden meanings, and add emotional understanding to the result.

// This is what I have so far. It’s a little rough, but I plan on doing much more research and coming back later today and this weekend to finish.

Of the many hot-button issues that have been plastered on every news station for the past several months, Nick Bilton connected the three most notable of all. Bilton’s article claims that if there were more government surveillance, that it would positively effect America’s justice system because by giving much more evidence to cases and making things much less ambiguous, creating more justice for Americans. I do agree with the idea of having more surveillance, but I believe it should be the individuals who are in control, not the government. The idea of dash cams and other recording devices being used in America, seems like it would do a lot with helping the Justice System, and would do a lot to protect the average citizens. Although I can definitely see why the government would want to keep tabs on phone calls, I think it’s a bad idea to have all of this information in the hands of one, huge, higher-power. I think that it would be much harder for an outside threat to access this information if it was spread across the population of private individuals in America, and not in one huge central company. Even if the government was only viewing the ‘suspicious’ phone calls, there’s no promise that someone else isn’t listening to all of the others. I also feel like there is another problem with tapping these phone calls, what’s considered suspicious. The citizens of America have no input into what keywords would make a conversation ‘suspicious’ or a ‘threat’, this was left completely to the government. This would allow the NSA to define anything it wanted to as a ‘potential threat’ and lead to many more serious privacy issues in the future.

This is the function to find the factorial of a number. 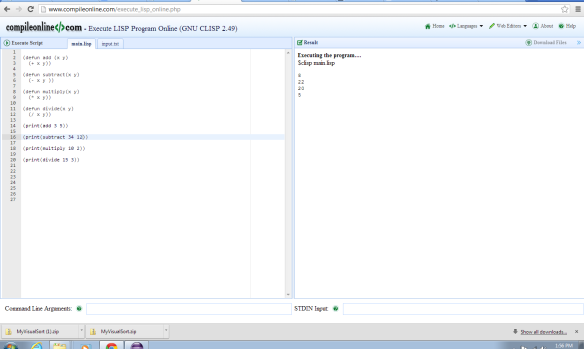 This is my code for the addition / subtraction stuff in lisp.

For my final project I’m going to research the ethical issues in AI. I really want to learn more about the debate with artificial intelligence and where computer scientists think artificial intelligence will be in the future and how it will affect society. There is so much that goes into just defining what artificial intelligence is, I really want to understand the different ethical debates about computer science and understand the viewpoints of many experts. The progress of artificial intelligence is an issue that effects all members of society, in very positive and possibly negative ways. People need to be informed on issues involving computers because computers essential to almost all of society at this point, and their influence will only become greater with time. Once people have settled the debate of what the best direction for artificial intelligence is, there is more time for discovery and the technology involving AI will be able to grow more than it ever has. For my project, I really just want to research and understand this topic enough so that I can form a solid opinion on these important issues and have conversation to other people interested in this topic. This will mainly include a lot of research and the formulation of a presentation or paper of some sort. I feel like finding a lot of sources on this issue may be a bit difficult considering Artificial Intelligence is a very specified field, I’ll also do most of my research on the computer considering I don’t think the EPGY students have access to the library, I’ll have to double check. I’ll definitely think more about this project and start research over the weekend.

My interest in computer science has always seemed a bit strange to the majority of my friends and family, even though my father is a computer technician and my brother has always had an interest with computers, the idea that I would take up after the two of them didn’t really sit right with some. And although other peoples dissatisfaction in my own personal interests didn’t sit well with me I could kind of get where everyone was coming from. I live in Southern Indiana / Louisville, Kentucky and where I come from being a software developer is practically unheard of, I can honestly say that before I took Computer Programming in High School, I had never even heard someone mention that they’d even consider entering the field of Computer Science or showed any interest in learning how to code. Even though there is a huge market for good Programmers in the modern workforce and Computer Science is one of the highest paid degrees now, I had always been told that Computers were a ‘fad’, or a ‘waste of time’, and that these jobs offered no money or stability. And I believe there’s a reason for that, a pretty obvious reason actually. Computer Science is a relatively new field, doctors and businessmen and lawyers have been around longer than anyone can remember and therefore have the luxury of being considered ‘successful’ endeavors and have a very defined air of prestige and importance, that Computer Science doesn’t have at the moment. From the start of Pre-School it’s ingrained in everyone’s mind that if you want to be someone, or help your community that you have to study hard, do well in school, and become a doctor. Not once was Computer Science ever mentioned to me at job day in elementary school, and whenever I mentioned my father’s job to anyone at school, they had no idea what a computer technician was. I think this is another huge problem when it comes to the lack of Procedural Literacy in the majority of society, there isn’t enough information on what Computer Science is, what it does, and how it can help society. I believe that given more time, effort, and education a lot of people will consider Computer Science a good option and society will consider Procedural Literacy a necessary thing that children should learn and be informed about.

I was actually surprised by how much fun I had playing this game… at the beginning. It did become a bit tedious at the end, probably because I’m use to playing video games that have immediate reaction and move much more quickly. I can see how this game is a very good example of “if else” statements and can be used as a teaching aid, but I doubt I’ll be playing it for recreation very often.